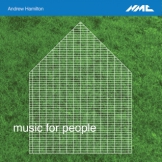 Percussionist Maxime Echardour and I first worked together with our respective ensembles EXAUDI and L'Instant Donné. In 'To The People' we explore duo repertoire of an experimental nature from either side of the Channel; the main focus of the programme is a large-scale commission by Andrew Hamilton which sets text from America by Jean Baudrillard.

Benedict Mason Dreams that do what they're told

Andrew Hamilton To The People (wp)

Our recording of To The People was released as part of a portrait disc on NMC in 2018.

This project was generously supported by the Arts Council Ireland, RVW Trust and the Holst Foundation.