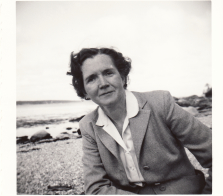 Eighty years ago, in 1941, American marine biologist Rachel Carson published the first book in what grew to become her Sea Trilogy. Struck by Carson's distinctive voice, which endures as a beautifully poetic yet urgent clarion call in defence of the natural world, I launched 'The Carson Commissions', a two-year project that attempts for the first time a thematic approach to commissioning that integrates an area of personal interest — environmentalism — with my public music-making. I have commissioned four composers to write new pieces that respond to the work of Rachel Carson (1907-1964). The four pieces are not designed to be performed as a set, but rather will feed into a variety of different programmes. The aim is to create a body of new work that refreshes our love of the natural world and celebrates one of its greatest champions.

The Carson Commissions will be woven through my activity in the next two seasons. Mark Knoop (piano) and I will premiere the new works by Lara Agar and Laurence Crane at Musica Sacra, Maastricht in September 2021; they will then be performed at the Oxford Lieder Festival and the Music We’d Like to Hear series in London. Performances of the new works by Nwando Ebizie and Newton Armstrong in the 2022-23 season are planned at City University’s Concert Series, The Exchange in Penzance and several European festivals. Additionally, all four works will be recorded for commercial release on YouTube and/or CD.

The Carson Commissions have been generously supported by Arts Council England's National Lottery Project Grants, PRS Foundation's The Open Fund for Music Creators and the RVW Trust. Co-commission partners include Musica Sacra Maastricht and Oxford Lieder Festival (Crane) and Juliet Fraser (Agar). The project is also supported by Canongate, publishers of a new edition of Rachel Carson's ‘Sea Trilogy’. Thanks go to Katie Huckstep at Canongate and Meg Davies at Ki Agency.