My recording of Morton Feldman's Three Voices was released on Hat Hut Records in November 2016. It is now only available in digital format from OutHere. 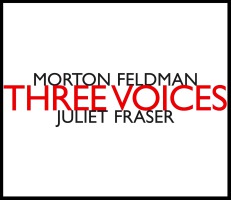 ...haunting, rich, and hugely tempting to a relistening, time and again.

It takes some guts (and some lung capacity) to approach a work that is so strongly associated with another performer, but soprano Juliet Fraser has both and her interpretation of Three Voices is truly a statuesque rendering
of space and beauty.
The Wire, May 2017
A snowblinding mesh of strong beats crossing weaker downbeats keeps the music static yet oddly busy – the delicate tread of Fraser’s rhythmic footfall leading you further into the blizzard.
Gramophone Magazine, April 2017
...mesmerising performance, wonderfully controlled and paced...
Like so many of Feldman’s scores, Three Voices has a unique, lingering beauty.
The Guardian, April 2017

MY NOTES ON THREE VOICES

Looking through Feldman's body of work, it's striking how many vocal pieces he wrote. From the early, exquisitely succinct Only (1947) for solo voice, to Rothko Chapel (1971) for viola, percussion, celesta, soprano, alto and chorus, or the one-act ‘opera’ Neither (1977), his extraordinary setting of Beckett (one can't quite say 'collaboration with'...) for soprano and orchestra, Feldman eschews traditional groupings to present the voice as an equal player; singer, at last, as a musician. Three Voices, written in 1982 for Joan La Barbara, was the last solo vocal piece he wrote before his death in 1987 (For Stefan Wolpe, dedicated to his composition teacher and written for chorus and two vibraphones, post-dates it). It sets part of 'Wind', a poem by his friend Frank O'Hara that had been dedicated to him and which he had set earlier in its entirety in The O'Hara Songs (1962) for bass-baritone. Writing later about Three Voices, Feldman said: 'One of my closest friends, the painter Philip Guston, had just died; Frank O’Hara had died several years before. I saw the piece with Joan in front and these two loudspeakers behind her. There is something kind of tombstoney about the look of loudspeakers. I thought of the piece as an exchange of the live voice with the dead ones – a mixture of the living and the dead’.

Conceived as a trio for the one voice, with two pre-recorded parts and one to be performed live, the score is conventionally notated (all parts are written out with precise rhythms and pitches, though often in differing metres) but is beguilingly short on some details. There is, for example, no tempo indication, no vowel specified for the many lengthy passages without text, no dynamics bar an initial ppp, and no guidance as to which voice should be the 'live' one. Instead, performance history has resulted in the printed edition including an introduction written by Joan La Barbara (in 2007) in which she relays her remembering of conversations about the piece with Feldman and shares her own performance practice.

Respectful of this performance history and aware, of course, of the work's evolution in the hands (and voices) of other interpreters, I struck out on my own to create a version that exposes the intimacy and physicality I feel to be inherent in the music. In two specific areas have I deviated from precedent: I decided not to worry about singing with 'almost no vibrato' since my natural vibrato is hardly unwieldy and it seemed altogether wise to avoid the psychological knotting-up of performing such a demanding work with a clamp on; I have also taken a subtly liberal approach to the vowel, moving between 'ah', 'aw' and 'oo', partly as a nod to the natural vowel modification that takes place in different registers, but more because it felt justifiably Feldman-esque to exploit different timbral shadings, smudging somehow the otherwise sharp division between material sung to text and material sung to a vowel.

Versions range in length from about 45 minutes to over an hour and a half. My version comes in at 53 minutes, the result of having settled on a workable mean pulse from which I then invited certain passages to deviate gently. Designing one's version requires an artful balance between the tensions of conflicting demands: the differing exhaustions of a breathless sprint vs. that of a long-distance marathon; a precision that retains its humanity without tipping over either into something clinical or distractingly flawed; a dynamic that points to something delicate and interior yet allows for flow and freedom in delivery.

A balance had to be found, too, when designing the sound of the final mix. Here, the O'Hara poem provided an important cue. Feldman chose to set only a few lines of O'Hara's poem, but I was struck by the pervasive sense of enclosure, darkness and desolation when the poem is read from beginning to end. The concept for the sound is found in the image of the snow globe: although the scene may at first seem beautiful, the confinement becomes loathsome. This 'gorgeous' music is placed in a comparatively dry and 'dead' space, bringing the listener into the glass ball to witness, from a cool distance, the rawness, fragility and vulnerability of the voice.

The challenge of recording this piece is to avoid rendering the delicate tapestry either too cold, too clinical, or too gorgeous; to rest in the ambiguous space between beauty and evil, between the living and the dead. On every level, from the text of O'Hara's poem to the demands of Feldman's music, this is a work that is about the very human effort of wondering, reaching, grasping.

go to Mark Knoop (for producing and editing the recording sessions) and Newton Armstrong (for engineering and mastering the recording), and to the 81 wonderful souls who supported my Kickstarter campaign which made this recording possible, including: